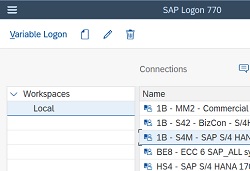 SAP has recently released the new SAP GUI for Windows 7.70 and this article describes the new features included in this release as well as the removed and discontinued features of previous GUI releases.

For the latest downloand and installation files

Quartz is a new visual theme

The Quartz theme is the successor to the Belize theme, and it provides visual integration with the Fiori 3.0 theme found in other SAP UI frameworks. This theme also provides a dark theme for users who want a dark background for the first time.

Quartz's feature set is very similar to that of the Belize theme. It supports all SAP products that are still supported, as well as Accessibility and the Fiori features (right aligned labels, automatic use of the full screen width, and so on) that were introduced in Belize. Different color palettes for different SAP systems are also assisted by Quartz and Quartz Dark.

The colors and some usability changes are the key variations from the Belize themes (like an improved contrast for selected items, additional hover states, and so on).

Quartz and Quartz Dark are the default themes in SAP GUI for Windows as of release 7.70. If nothing else is set, SAP GUI will open in Quartz or Quartz Dark, depending on whether Windows' "Dark mode for applications" is enabled.

Browser options (Edge based on Chromium)

As of release 7.70, SAP has added the Microsoft WebView2 control (Edge based on Chromium) to the SAP Interface as an alternative to the Internet Explorer Control, providing a more modern browsing experience (see SAP Note 2913405 for more information). 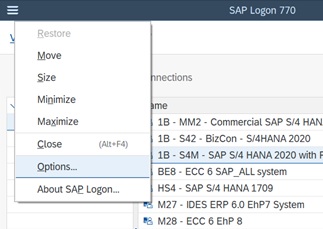 Because the Microsoft Internet Explorer control is still the default setting in SAP GUI, you must change a setting in the SAP GUI options dialogue before you can use the new browser control.

The new HTML Control is clearly incompatible with web content that is not compatible with Microsoft Edge / Google Chrome. If you are using this type of content, you can either move to new HTML standards or stick with the Internet Explorer HTML Control (at least as long as Internet Explorer is still supported by Microsoft). Also see SAP Note 2901278.

For web pages that do not have a font set in the Microsoft Edge browser, the WebView2 control does not use the default font settings (as opposed to the Internet Explorer control). As a result, the proportional font set in the SAP GUI options dialogue is used by default in the SAP GUI HTML Control based on WebView2. For more detail, see SAP Note 2942740.

The SAP Interface package contains four controls that can be used to get data from a SAP device without using SAP GUI:

These controls were only available in 32bit versions until release 7.60. This has become a challenge, especially with the increased use of Microsoft Office 64bit versions, since 32bit controls cannot be easily invoked from a 64bit process.

SAP now provides 64bit versions of these controls (both non-Unicode and Unicode) that can be installed alongside the 32bit versions as of release 7.70. Scripts that use these controls can now be run from 64-bit applications like Microsoft Office 64-bit. To take advantage of this, include the appropriate installation part in your installation kit. Also see SAP Note 2724656.

Up until release 7.60, SAP GUI only supported scaling using the primary monitor's scaling settings. SAP let the operating system scale the SAP Interface window on other displays. This has some disadvantages, such as when SAP GUI is embedded in a multi-monitor scaling aware program. This results in a fuzzy display of SAP GUI in SAP Business Client, but when embedded in Microsoft Internet Explorer, the dimensions of SAP GUI within Internet Explorer are calculated incorrectly. For more detail, see SAP Note 2541592.

The functionality can be turned on in the SAP GUI options dialogue for Belize and Quartz themes.

As a result, beginning with the Blue Crystal theme in SAP GUI for Windows 7.70, SAP has added different background colors to distinguish tree control hierarchical levels in newer SAP GUI themes (this excludes the Corbu theme). This feature is disabled by default, but it can be enabled as described in SAP Note 2943146.

The SAP Signature Theme feature is turned on by default and cannot be turned off. Please notice that this feature is not available in High Contrast themes because the contrast will not be adequate to satisfy the minimum contrast criteria.

A dialogue for capturing and replaying scripts is available in SAP GUI scripting. There were some problems with this dialog's functionality and usability. As a result, in release 7.70, it has been reworked. SAP Note 2953860 provides more detail on the improvements and customizations.

Overflow in the footer of dialogue boxes

The vertical resolution of the monitor limits the maximum width of a dialogue box (popup). When an application places a large number of buttons or wide buttons in the application toolbar (footer) of a dialogue box, or when the resolution is low or the font size used is large, the maximum width is often exceeded. Such buttons could not be presented in SAP GUI releases prior to 7.60.

As a result, beginning with Belize themes and SAP GUI for Windows 7.70, SAP GUI turns all buttons that don't fit into the dialogue box into an overflow button. If necessary, a button "..." appears in the dialogue box's footer, which opens a context menu containing all buttons for which there was insufficient room. This means that all programs, including those with a lot of big buttons, can be used correctly.

ALV Grid control has a focus location that can be customized

ALV Grid controls may have a toolbar area, a title area, a column header area, and a table area. When you use the keyboard to switch the emphasis to the ALV Grid control, the SAP GUI for Windows defaults to the table field. This is because, in many situations, the user needs to do something in the table area first (such as choosing a column) before using the toolbar buttons (like for sorting the selected column).

However, if a different behavior is required, a newly added registry value can now be used to accomplish it. You can choose if the emphasis should be moved to the table area first (default), the toolbar area first (value = 1), or the column header first (value = 2). For more detail, see SAP Note 2973107.

By default, SAP GUI copies values from Dynpro types’ of input fields/labels (such as steploops) to the Windows Clipboard, using space characters as filling and separating characters.

The content of the input field is replaced with the concrete value and the required number of spaces to fit the field length. Space characters are often used to fill empty space between items. Since TAB characters are often used as separating characters in other applications, such as Microsoft Excel, this creates usability problems when copying from or into them. If the format, including the spaces, is not followed exactly, copy and paste operations may fail.

A new copy and paste mode can be enabled via a registry value in SAP GUI for Windows 7.70. (see below). When this mode is allowed, SAP GUI no longer uses spaces as separator characters and instead uses TAB characters.

Depending on the application settings, monospaced fonts are used for ABAP lists and other UI components (for example in numeric fields). The newly released “72 Monospace” is the default monospaced font for Belize and newer themes as of SAP GUI for Windows 7.70. "Lucida Console" was previously used, but "72 Monospace" has many advantages:

Dragging the title bar to transfer the main window

The caption (top bar) of the SAP GUI window in Belize and newer themes can only provide limited space for dragging the SAP GUI window to another location on your desktop. This is particularly true if the main menu is open and includes a large number of items. Users may now press the title bar that displays the program title and drag the window to the desired location while using Belize or newer themes.

Table controls with a scrolling indicator

The "Table Control" and the "ALV Grid Control" are the two key user interface elements that serve tables in SAP GUI.

When the user scrolls vertically in the table using the mouse or keyboard, the table control displays a so-called "scrolling indicator" as of patch level 1. This indicator allows the user to more precisely drag and drop the scroll bar button, making it easier to identify the location of the currently displayed block of data within the table (thumb). Except for the "Classic Theme," this feature is available for all SAP GUI themes.

In Belize, the main menu is presented, as well as newer themes

Features that have been retired

The SAP Interface installation no longer contains the "Assignment Control" that was used in transaction UCWB. If you are using transaction UCWB, instead trigger the Tree Control by following the steps in SAP Note 2704440. 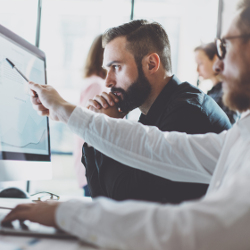 4 Steps to Become an ABAP Programmer

Programming, coding, and development are all three words that refer to the same idea — the creation and modification of online platforms that help businesses thrive. Systems Analysis Program ... 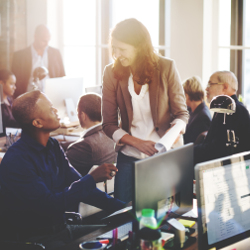 How to Get Certified as a SAP Workflow Administrator

At enterprise-level businesses, there’s always a lot of “talk” that happens. Executive planning, departmental mergers, promotions, changes in trajectory — there’s a lot of ...

5 Ways You Can Become an SAP Web Application Developer

Web application development is one of the most in-demand skill sets and areas of expertise in the world today. It’s needed by everyone from independent freelancers to global enterprises and even ...