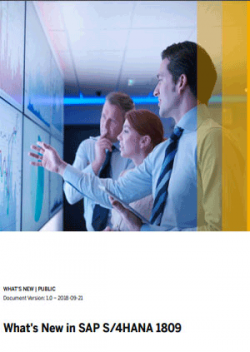 SAP has released the newest version of their flagship ERP software: S/4HANA 1809 (the version number 1809 refers to the actual release year and month, as in September 2018). SAP has committed to releasing a new version of its on-premise ERP system every year.

Version 1809 is full of new functionalities, improvements and updates - all of which have been documented in a handy 770-page PDF document that you can download now.