Finance in S/4 HANA: The What, Why and How

Nowadays there is a tremendous interest in S/4 HANA, especially from current SAP customers. It’s about what, why and how to go to S/4HANA. This motivated me to start writing a series of blogs on the subject matter.

In this part 1 of the blog I will explain the what and the why of S/4HANA. In part 2 the How will be explained further.

Let’s start from the beginning by knowing the product. The What. In the title of this post I say ‘Finance in S/4HANA’ and not ‘S/4HANA Finance’. That has a reason which you will find out below. This post expects some entry level knowledge about S/4 HANA and the HANA technology in general. I will dive into the different S/4 HANA product versions and the Finance specific topics.

The What… Let’s know the product

In 2014 SAP introduced the simple innovations starting in the area of Finance. The new product was initially named ‘Simple Finance’ and at that time there were already rumors about ‘Simple Logistics’. The Simple naming convention lasted until the release of Simple Finance 2.0. In 2015 SAP announced that the name Simple Finance will be changed to S/4 HANA Finance. By doing this, SAP introduced heterogeneous naming across different product lines.  Simultaneously it created a lot of confusion with all the different release numbers.

Let me try to help you understand the differences. As you can see in the figure below, S/4 HANA Finance is a different product that S/4HANA (Enterprise Management).

S/4HANA Finance includes only the finance innovations (replacement of classis FiCo) on to the already existing system. So everything in logistics will remain as it is. You can imagine that the migration effort to this product is lower than directly going to S/4 HANA. More about this in the ‘How’ topic.

Except for some minor differences which are listed below. This make things a bit easier to understand later on :).

Now we have to understand the product. Let’s look at the benefits of S/4HANA for our organization. In this topic I will hit the key differences compared to classic FiCo in R3.

To make the list comprehensive I will also mention some features which were already included in Simple Finance 1.0 back in 2014.

One Single Source of truth and all accounts become GL accounts

All actual line items will be stored in the new table ACDOCA. The will be no redundant, aggregate or total tables anymore. All dimensions of GL, CO, COPA, AA and ML will be in ACDOCA.

In the ACDOCA whe have multidemsional GL, parallel ledgers, parallel currencies, 999,999 line items and custom defined fields. The chalenges of gathering combined content of several tables to represents the truth and reconcile the different level of detail stored in the different components/tables of SAP (e.g. CO= much detail, Fi= less detail) is now somehting of the past.

S/4HANA One Single Source of Truth

The reason of the merge of secondary and primary cost elements is the fact that all actual line items will now be stored in one single table. The ACDOCA. This also applies on purely (internal) CO postings. You should not include these secondary accounts in your P&L. 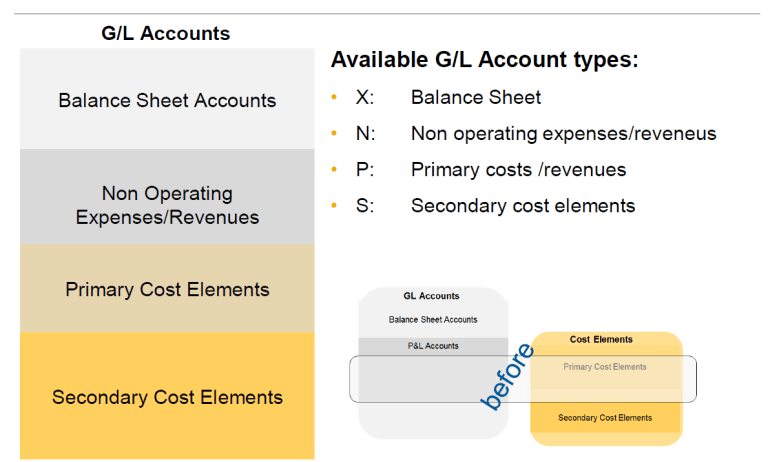 In S/4HANA 1610 we can now have up to 10 parallel currencies per ledger. Real-time conversion for all currency types is possible, Zero balance per document is guaranteed for each currency and CO-area currency is now calculated for all accounts (also non cost element).

See an example of the 2 methods below.

With S/4HANA SAP focuses on the enhancement and integration of Account based COPA. This is the preferred type of Profitability Analysis. Costing Based profitability analysis is still available and can be used in parallel, but there will be no integration with the Universal Journal (ACDOCA table).

Below you will find the list of enhancements on Account Based profitability analysis. Critical gaps of the past are closed.

Summary of the enhancement:

Unfortunately there are still some limitations which are on the future roadmap. Current limitations of Account Based profitability analysis:

In my opinion, this is one of the greatest enhancements in Profitability Analysis. I was always thinking why this was not possible in SAP and now it is here! With a couple of additional configuration steps the ‘Attributed PA segment’ can be activated. 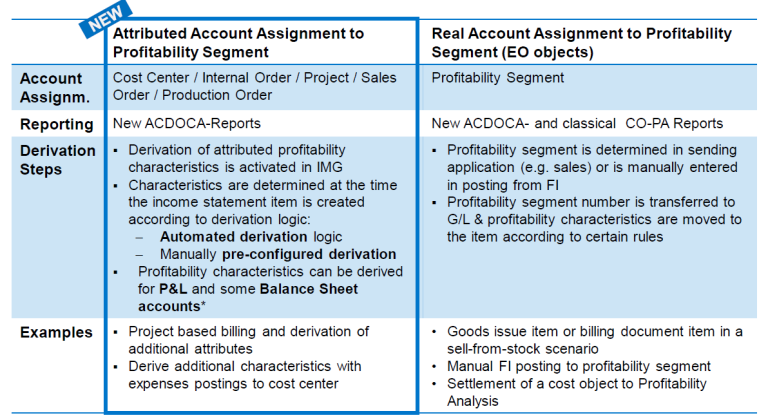 The revenue recognition process is now fully integrated with the Universal Journal. There is no separate storage for Revenue Recognition data anymore.

The main new features and differences compared to the old house bank and bank account setup are the following:

To highlight the latest point. Bank accounts are now part of master data and can be maintained by users through a dedicated Web Dynpro or Fiori application. The house banks itself are still created in customizing. Transaction Fi12 is obsolete and the new transaction Fi12_hbank is introduced for this purpose.

Usage of the New Depreciation Calculation Engine is mandatory and the tables ANEA, ANEP, ANEK, ANLC, and ANLP are not updated anymore in New Asset Accounting.

An example of the new posting logic during integrated asset acquisition with two ledger with two different accounting principles: 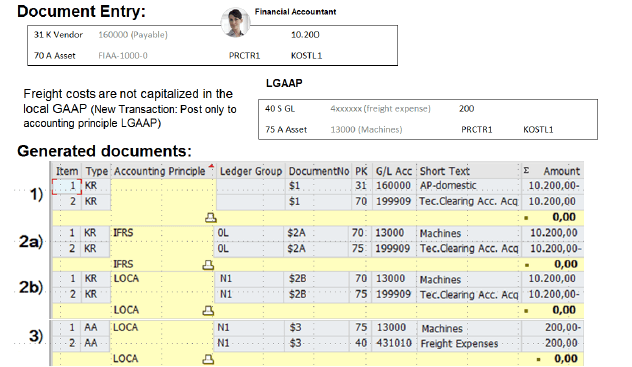 I can talk hours about reporting in S/4HANA. With the new data structure (e.g. ACDOCA), all the pre-delivered Virtual Data Models (VDM’s), the performance of HANA and the modern and state of the art reporting tools/interfaces, there are so many new possibilities.

The concept of embedded analytics in S/4HANA is to provide pre-defined models across the entire suite in which the business logic is embedded. So the provided data models are delivering contextual information rather than raw data.

In a nutshell I can say that the following reporting tools are mostly used at my customers where I did S/4HANA implementations: 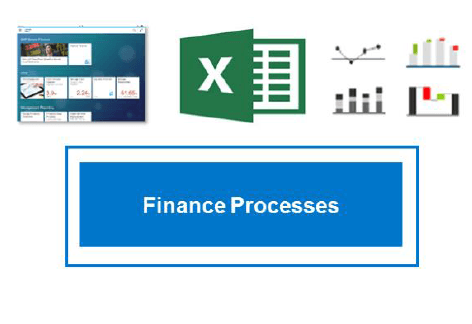 Each tool has its own purpose of course. I can say that with out of the box analytical Fiori apps and the KPI Modeler in SAP Smart Business together with the Analytical Path Framework already provides a lot of content and satisfies a lot of customers.

Some examples of Smart Business cockpit and the Analytical Path Framework apps.

S/4HANA Out of the Box Reporting with Fiori

Next to these type of apps, SAP provided multi-dimensional reporting apps. For example the Market Segment Actuals app in which I can report on my P&L with in addition my Profitability Analysis characteristics.

For more flexibility the products from the BO suite (additional license) Analysis for Office and Lumira can be used. This is worth another separate blog.

After reading this blog I hope you have gained a good understanding of the S/4 product and the key differences and innovations in the area of Finance. Part 2 will explain the How. With the different migration scenarios and deployment possibilities.


Ugur Hasdemir https://www.linkedin.com/in/ugurhasdemir/
Ugur Hasdemir
https://www.linkedin.com/in/ugurhasdemir/
Ugur is a trusted advisor with experience in ERP implementation since 2010 in the area of Financial and Management accounting. Driven by his passion for new technologies, Ugur has focused on SAP S/4HANA since the introduction of Simple Finance in 2014.
Previous Post:
S/4 HANA Finance - Dealing with Cost Elements
Next Post:
S/4 HANA Reporting Considerations